During a session on January 05, 2009 I created this drawing: 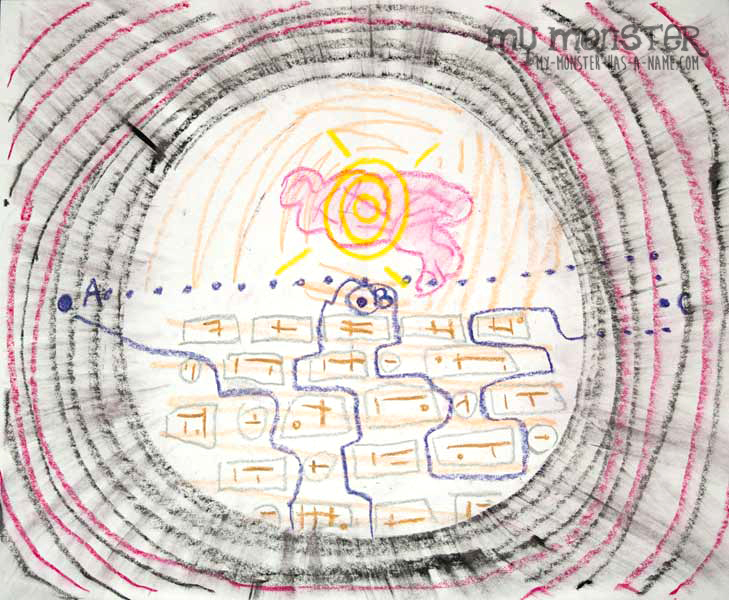 Unreality – can also be viewed in the In Session Gallery

This was a response to my therapist asking me to draw the “unreality” that I had been having trouble with at the time. I had explained to her that I sometimes did not feel alive, or real. I would say now that at these moments I feel like a marionette doll or like a Sim controlled by somebody else. This was especially happening while driving. All of a sudden I would get this feeling and then become very afraid that I was going to crash, so I would pull over to calm down, and the feeling would pass. Sometimes it would pass before I could pull over. But it happens others times to, such as when I am taking a shower.

For some reason, and especially when I am having trouble with memory flooding and flashbacks, it is triggered for me to take a shower (I know why, I just have not gotten to the abuse memories associated with it yet). It happens almost everyday now, for the last two weeks. I just feel like I am watching myself and there is a broken tape in my head repeating, “This is not happening, this did not/could not happen.” I eventually recover and ‘snap back’ to reality and move on with my day.

It is a feeling of being disconnected from myself, from my mind and body. ‘I feel’ is not really the right term either, more accurate would be that I DON’T feel at these times. I sometimes think that ‘I’ am dead or that I have died.

So that is the background behind the unreality I was trying to represent in the picture above. I felt like there was a spotlight on my brain that is run by my memories. I also mixed into the picture how I try to solve problems, or maybe the problem of the unreality, which is represented by the A, B, C purple path and the grey/brown square symbols. I explained to my therapist that the grey/brown squares were like binary computer information.

On the back of the drawing my therapist wrote the following notes:

The first note frustrates me because I tried to explain that the path only looked like it was not connected, but that was only because it went into the “hypnotize” area.

However, I still am not sure what this drawing says, expect that I feel it is related to dissociation. It did help to calm me down to create it at the time.